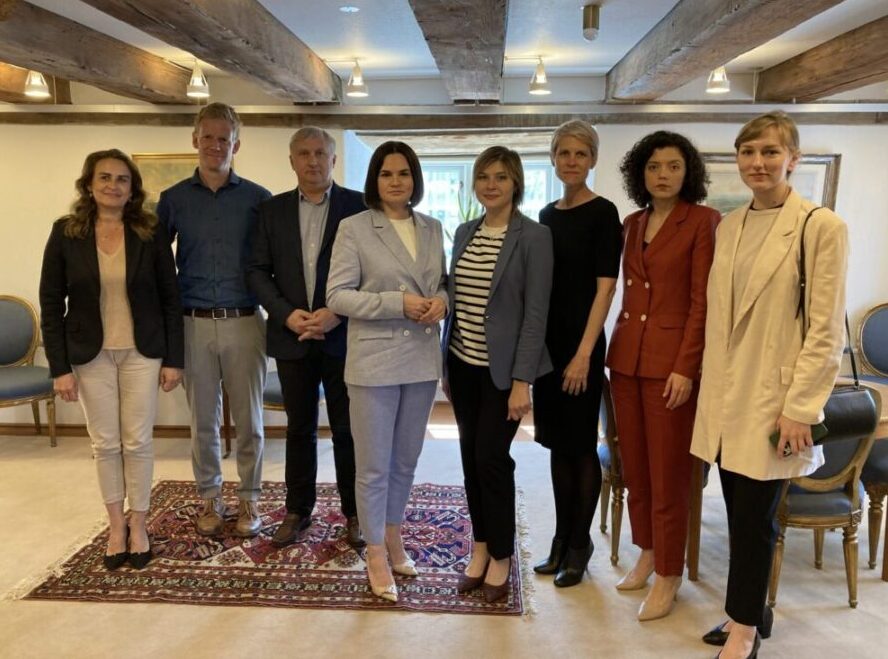 The International Accountability Platform for Belarus (IAPB) met today with Svetlana Tsihanouskaya, the leader of the democratic opposition of Belarus, to discuss the work that it has been carrying out to support accountability efforts for gross human rights violations committed in Belarus.

The IAPB is a coalition of Belarusian and international independent NGOs which was established in March 2021 to collect, consolidate, verify and preserve evidence of gross human rights violations allegedly committed by Belarusian authorities and others in the context of the August 2020 presidential election and its aftermath. The meeting, the first with the exiled opposition leader, took place in Copenhagen, and it was attended by representatives of the IAPB’s Steering Committee —Human Rights Centre «Viasna», the International Committee for the Investigation of Torture in Belarus and DIGNITY-Danish Institute Against Torture—and the IAPB secretariat.

The IAPB provided Tsihanouskaya with an overview of the work it has carried out to date to collect and preserve information and evidence and make it available to accountability bodies, and its plans to ensure such material is accessible to longer-term efforts to hold perpetrators accountable and ensure remedies and reparations for victims.

Since its launch, the IAPB has gathered over 20,000 documents, including victim and witness statements and related documents, and 500,000 items from open sources on gross human rights violations committed in Belarus. It has also provided support to UN OHCHR’s Examination on the Human Rights Situation in Belarus and to criminal justice authorities in several countries to ensure perpetrators of these crimes can be brought to account.

The IAPB’s most recent progress report, released in April, highlighted that since September 2021, the situation in Belarus has remained critical, including in the context of recent protests against Belarus’ potential support for Russia’s aggression against Ukraine.

Belarusian authorities have continued to persecute persons perceived as a threat to the government and have liquidated the majority of civil society organisations. As of 9 June 2020, there were 1,232 political prisoners in Belarus, according to data collected by IAPB Steering Committee member Viasna, including a number of members of their team, and over 4,000 complaints of torture and other ill-treatment in state facilities having been filed since August 2020.

The IAPB’s work builds on the ongoing efforts of Belarusian human rights organisations to collect information about human rights violations committed in Belarus, and itc is supported by 20 States and the European Union.

English: Kate Vigneswaran, Head of the IAPB, on kavi@dignity.dk